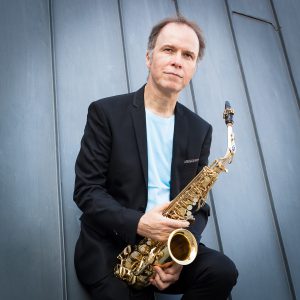 Philippe Geiss Teacher at Strasbourg Conservatory Teacher at the Strasbourg Superior Academy of Music - HEAR Saxophonist, composer and teacher, tireless advocate of reconciliation between different musical spheres he has always

Philippe Geiss
Teacher at Strasbourg Conservatory Teacher at the Strasbourg Superior Academy of Music – HEAR Saxophonist, composer and teacher, tireless advocate of reconciliation between different musical spheres he has always favored the creation of bridges between music . Partner classical performances and improvised Jean-François Zygel and fellow jazzman Jerry Bergonzi , he developed a language inspired by his many artistic experiences. the “Crossover” specialist, he speaks with the same passion in classical, jazz or multi mix – cultural music today. Professor at the Strasbourg Conservatory   and the Superior Academy of Music Strasbourg – University of the Arts of the Rhine . He gives concerts and master classes throughout the world, the “Blue note” of New York via Shanghai, Madrid, Cambridge, Montreal, Tokyo, Bangkok, Miami, Montevideo or Sydney. It gets in the company of Emmanuel Séjourné, the Academy Award of the French drive for his Debussy arrangements, Ibert and Milhaud and the award for best stage music at the Festival of Avignon, for “The legend of the centuries “Victor Hugo. High demand as a composer, he is played by prestigious performers: US Navy Band, Brandford Marsalis, Nederland wind ensemble, Slovenian Police Orchestra, Trombonissimo, Quartets: Habanera, Alloy Diastema, Ellipsos … His music ranges from contemporary research, swing jazz and exotic world music. Its catalog includes parts for all levels, from beginners to the more experienced performers. His works are published by Robert Martin, Billaudot, Leduc, Alphonce production … His curiosity for research in the ﬁeld of new instruments led him to be interested in today ‘  Karlax  “new multimedia tool designed for performing arts He leads the Sax & Co association that organizes each year from mid-November to late December “Meetings of the saxophone.” In continuation of this action he coordinates France’s bid to present to welcome the World Saxophone Congress in Strasbourg in July 2015. He is an artist Selmer , Rico and Da Fact Philippe Geiss is a Selmer & D’Addario artist.